Starting a blog seemed like a simple thing. You choose a topic you love and/ or are good at, you go to a “blog” website, and you start writing, right? Well, after making these assumptions I soon discovered this was not the case. Choosing a topic was not necessarily the easiest thing. I like too many things and, though not knowing it, my husband told me to “PICK ONE!” He was talking about another friend of ours who is making school decisions right now but it struck me at the time that if I wanted to start a blog post I needed to PICK a passion! I love running, reading, teaching (I’m an Elementary teacher by trade), making food (and baby food right now… I have a 9 month old), and probably more. Uff da! (Sorry, my Norwegian heritage kicked in there for a moment)

So, I picked one: FOOD blogging. Well, wonderful!! Now starting a blog will be easy, right? Unfortunately… no. There are so many topics in the realm of food and several that I am interested in (healthy eating, meal/ menu planning, food for babies/kids, learning to cook, eating to fuel your running)…. anyhow, I couldn’t pick one. The answer to this second conundrum came from my daughters: Rachel and Emily (who you… whoever you are… will be hearing about if you follow me). They were watching a “Scout & Me” (LeapFrog) Phonics show on Netflix and they started going through the ABCs…. hmmm, an idea struck….

I thought I was incredibly clever coming up with “Apples” and “Ziti” as my A and Z food words, but I would soon find out that there are already blogs out there very similar to (or the same as in some cases) my title. I was discouraged at first but then I told myself to plow through this last roadblock to starting a blog and I went to WordPress and got started. Before I knew it I was creating accounts all over to create a social push for my blog. I admit I’m incredibly nervous for friends and family who might follow me… even my husband doesn’t know I’ve started this officially (he’s getting some much needed guy time tonight) and I’m probably most nervous about telling him about it. Hmmm…. why is it that we think those closest to us will judge us more harshly than strangers??… maybe they would in some cases, but I have a feeling that most of the time we are the ones judging ourselves (I’m definitely my own worst critic at times).

The start date is actually not today… it’s November 1, 2012. Just a few short weeks away!! The end date is the same except the year will be 2013. When I was planning this whole thing out today it struck me that there are double the amount of weeks in a year as there are letters in the alphabet. Thus, I decided that this is how “Apples to Ziti” would work: One ingredient every two weeks, starting with A and ending with Z. I will not promise anything, but my goal is 4-6 recipes during those two weeks using that “secret” ingredient (ooooo…. I felt like I was on Iron Chef for a moment there!!… haha). Remember, I have two kids under two (Rachel Elizabeth turns two November 3rd and Emily Jane turns one January 14th) so there may be some weeks that I pack a bunch of posts in and some that I barely have a chance to breathe let alone blog. Can anyone relate? I have a feeling I’m not alone. ;o)

Most (if not all) of the recipes will NOT be my own. I do not claim to be an incredible cook or baker, and I have no official training. However, I have learned a lot since I was married in 2006. I called my mom from our honeymoon asking her how to make French Toast and the first time I attempted a family recipe (my mom’s Swedish meatballs) they were so salty that I ended up crying with my encouraging (though dry-mouthed) husband by my side. Well, he is happy to say that my over-salted meatball days are over and I now can make French Toast without a recipe (though I have tried out some new French Toast recipes from a few chefs since my honeymoon days!!… namely Paula Deen and, more recently, Ree Drummond).

I remember that when we moved from the East Valley to the West Valley here in Phoenix (for my husband’s job) we stayed at his parent’s house with our little Rachel. It was there that I found myself watching Food Network constantly whenever baby was sleeping (I was pregnant with our second at the time). Just watching the star chefs really helped my cooking skills and I learned a lot more when I started checking out the tutorials they have on foodnetwork.com. Check them out! They’re awesome! If you’ve never heard of different kinds of knives like I hadn’t (I used steak knives to do all my cutting up until about a year ago… haha… I can feel the chefs of the world wincing in pain), if you don’t know what knife “skills” are (how to chop, mince, slice, julienne… what knife to use for what, etc), if the word “deglaze” sounds like something you do with your eyes instead of in a pan…. well, I know exactly how you feel. Trust me, I’m no expert at any of the things I’ve been learning but I have come a long way! So, whether you’re a seasoned home cook or a newbie I hope you’ll enjoy following my food blog and I hope you try out some of the recipes yourself!

One more thing before I’m through… you need to know what the first “secret” ingredient will be! Starting on November 1st: (you probably already guessed it)… APPLES!! (Perfect season for it too!)

I’ve already bought SO many apples and am enjoying some of varieties that aren’t in stores most of the year (like Honey Crisp… yummy!) My husband is a sour apple fan, and I like the sweet ones best so I’ll have to try using both! I will also include a post on making apples for a baby. I think I’ll even throw in some baking along with the cooking recipes, and I’ll try to get some healthier recipes in there with the more indulgent ones. This is making me want an APPLE (Midnight snack time!)

(Look for some updates along the way until November. My dad’s side of the family is German and decided on celebrating birthdays “Oktoberfest” style. The menu so far is: Bratwurst, Sauerkraut, German Potato Salad, and Spaetzle… maybe German Chocolate Cake for dessert??… so I think I’ll have to post something about this!)

A is for APPLES! See you November 1st!!

I'd love to hear from you! Keep the comments coming. Cancel reply

Hi my name is Jenna

I'm an ordinary Arizona gal with an extraordinary God.

I’m a blogger, runner, home chef, and mother. Not to mention wife to my hunky husband.

I hate to do dishes.

I LOVE my young little family of 5.

I've lived in the big city and my mama was a farm girl, but I will always love living where I was born and raised… the suburbs.

From A to Z my life in the desert is anything but dry... Welcome to my home! 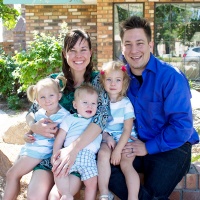 There was an error retrieving images from Instagram. An attempt will be remade in a few minutes.

PIN ALONG WITH ME!!