Whether you’re having a huge gathering at your house, taking a dish to someone else’s gathering, or just making dinner for your family, then it’s time to make Spicy Pop Pulled Pork.

Some pulled pork recipes take a bit to get together… even the slow cooker ones… but this one is not one of them.

In fact, I would challenge you to see just how fast you can get this in the pot. Next time I make it I’m setting a stopwatch and I plan to keep track so I know if I break my record. It’s just that fast!

The recipe is for cooking it in the oven but I made it in the slow cooker to save on energy and heat… 6 hours with the oven on in the middle of the day means an air conditioner that has to work DOUBLE time… not an option for our budget right now! 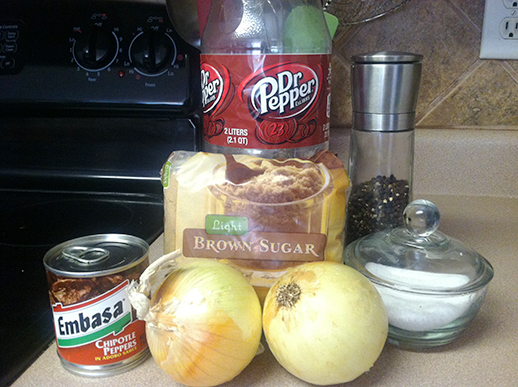 Peel and quarter the onions…

I bought a huge one so I’d be able to freeze the leftovers!

Even after trimming of the excess fat it was GIANT.

Yeah, you’re going to need a really big pot OR a large-sized slow cooker. The small versions won’t do it. You can make a half recipe if you need to to accommodate your pot-size. You’ll still have a LOT of food!

Oh yes, be sure you season the meat SUPER well with salt and freshly ground black pepper on BOTH sides… my roast was just over 6 pounds and it needed more salt when it was done cooking. DO NOT under-season… salt brings out all the flavors and make the pork melt-in-your-mouth delicious. Don’t OVER-salt either though… after all, you can add more seasoning but you can’t take it out at the end! 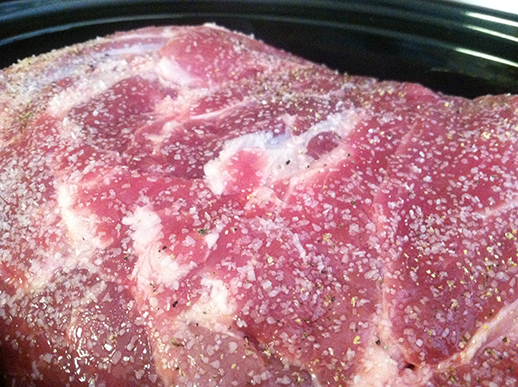 Dump in a can of Chipotle Peppers in Adobo sauce…

Pour a bunch of Dr. Pepper (or any dark soda you like really) over the whole thing…

And toss in several tablespoons of brown sugar… Mmmmm… LOVE that molasses-y goodness!!!

I turned the slow cooker to LOW, covered the pot, and cooked my 6 pound (plus) pork roast for a little over 8 hours… It was fall-apart tender when it was done! I don’t even think it needed that long to become super tender but it was

I turned the roast a couple of times during the cooking process just to ensure even cooking… it turned out SUPER yummy! 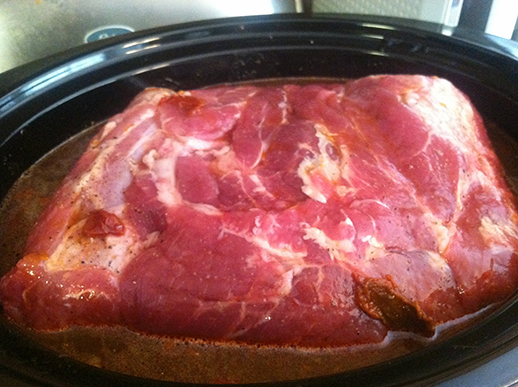 See… it pretty much fell apart on its own… 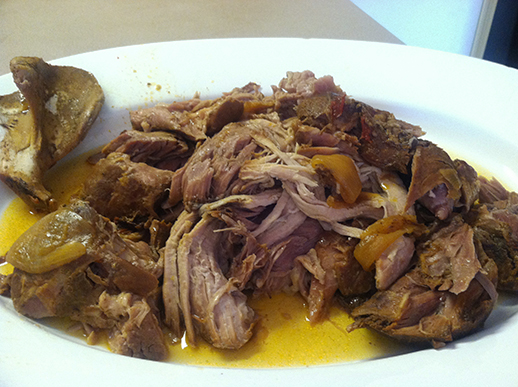 Except… I didn’t have to shred it AT ALL…

The meat did get shredded a bit more though… 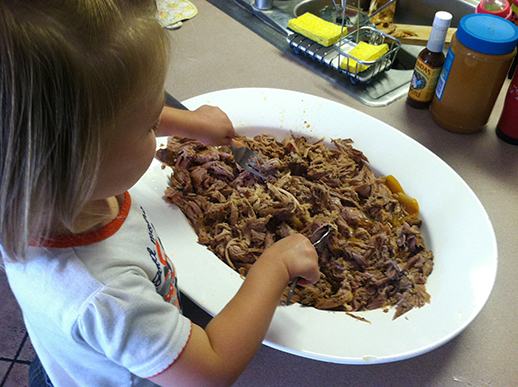 So nice to have a helper in the kitchen!!

Who knew shredding pork could be so much fun?

I put all of the shredded meat back into the sauce and kept it warm until we were ready to eat!

We had a salad on the side (our go-to) but I think serving these sandwiches with some coleslaw (for some crunch) and maybe potatoes of some sort… mashed, baked, au gratin… (you pick!)… would be amazing! Especially if it’s for a crowd of people!

And maybe some DESSERT on the side?! The link is for one equally as easy to throw together as the pulled pork is. Go for it!

The Onions… I love that you practically don’t have to prep them at all and they still get super soft and take on all the wonderful flavors of the meat and sauce. YUMMO.

I stored half of this in a gallon zip-top bag in the freezer to be re-heated for dinner in the near future. Just popping it back in the slow-cooker over low heat for a couple hours will probably do the trick! I’ll let you know… knowing there is a COMPLETELY fuss-free dinner waiting in the freezer comforts me. I know there will be a night when cooking is just not in the cards and I’ll be so happy to open my freezer door and find that beautiful bag of shredded pork in there. Even if you don’t have buns on hand you can just eat the pork on its own… tender, savory, saucy… I can’t wait!

We had a bunch of leftovers even after freezing half or more of the meat.

This is just about as budget-friendly as it gets. 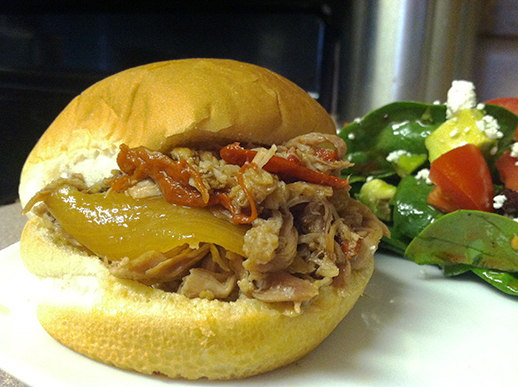 And, don’t forget, time yourself. I’m so curious how fast I can get at this. I’ll let you know.

I'd love to hear from you! Keep the comments coming. Cancel reply

Hi my name is Jenna

I'm an ordinary Arizona gal with an extraordinary God.

I’m a blogger, runner, home chef, and mother. Not to mention wife to my hunky husband.

I hate to do dishes.

I LOVE my young little family of 5.

I've lived in the big city and my mama was a farm girl, but I will always love living where I was born and raised… the suburbs.

From A to Z my life in the desert is anything but dry... Welcome to my home!

There was an error retrieving images from Instagram. An attempt will be remade in a few minutes.

PIN ALONG WITH ME!!